I have a rather nice LED worklight that my wife blew to bits yesterday by plugging in the wrong charger (12v instead of 6v charger).
PCB has disintegrated to a point where I cannot determine half the components, and the tracks have also lifted.

3.7v, 4000mA Lipo pack - dead as a donut. Nothing in it at all. Not sure if it has internal protection - hence totally dead, but lets say its a goner.

All the SMT white leds are wired so that approx 2.4v appears to illuminate them all at a decent brightness. Current? Hmmm

So, any advice or pointers on where I can go from here? I can probably track down a new Lipo pack, or make one up to the same current capacity.
I looked on good old Fleabay for a 3.7v Lipo charger pcb that will take 6v in. Not found one yet.

The old PCB had an unmarked black blob controller that gave to 2 levels of illumination. Nice touch, but I can probably live without that function.

Only other feature it has is an RGB led for charging status.

Staff member
It's not exactly clear what any plan you have may be., what you hope to salvage, what you are planning to replace, and how you are going to combine everything together.

Maybe describing the exact type of worklight would help with suggestions.

Easiest path would be buy a replacement work light.

Yea.... but its such a nice light. Has 120 leds on it. And.... they don't make it anymore.
I basically want to get it working again. Had a good look around and not found many 2000mA Lipos anyway (it has 2 of them).
Not really found a suitable charger circuit with protection either. I certainly don't know enough to design my own.

May head down the route of simply putting Nicads or NiMH batteries in it, and living with the lower battery life length. 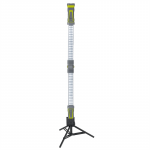 Staff member
Nice light. How about just making it mains powered; a low voltage PSU back at the ring with just light-weight low voltage cable running to it.

Hmmm.... I live in the sticks, so its nice being able to take it outside, so tied to an outlet isn't great.
Just CAD designing a shoe for a Dewalt battery. Wondering if I can 3D print a new base piece that takes one of my 10.8v Dewalt batteries.
Only problem is the wasted energy dropping that 10.8v down to 2.4v-3v.
The whole LED panel runs at max 3v. No idea of current. The leds are in panels of about 20. I might be able to rewire them in series to bump the voltage requirement up.

I use battery bank units [either 2 or one 18650 [?] cells] that have built in charge circuit and USB in out ports to charge the cells and prevent over discharge... these cost about $1 without battery [ebay] - they start drawing current from the cells when USB load is attached so you need switch or be able to pull the USB plug to 'turn off'. There are very cheap and efficient buck converters if you want to drop the 10.8 volts - again for a buck or two... [ebay]

Why not use a TP4056 based charger, upto 8v input and 1amp (adjustable) charge current.

I have used quite a few of these for charging single LiPo cells, the last few I bought (ebay) had low voltage cut off built onto the small PCB.

Steve2381 said:
Just CAD designing a shoe for a Dewalt battery. Wondering if I can 3D print a new base piece that takes one of my 10.8v Dewalt batteries.
Click to expand...

If you can rewire to work from 5V you can probably power it from a USB PSU or a USB Power Bank which may give you the best of all worlds; mains power, portable power, and the Power Bank should have all the charging and protection circuitry included.

With the addition of a mains relay you even have an emergency lighting solution to handle main power failures.
J

Hi
just what I thought today in pound streacher they have a power pack 5v out at 1000mA for
£3.99
regards john