Items that are covered in this blog entry:
2-6 Medium size LCD that uses elastomeric connector

If you hold this LCD at the correct angle then you can just about see that there are many 7-segment digits and a few symbols too. However I couldn't get it to show on a photo. Some segments are on in the photo.

U.R.T. may stand for United Radiant Technology, a company who produces LCD modules and provides absolutely no data on their website.

According to a Chinese website, this is from a 'Danfoss FC302', whatever that is. But that's a well known company so it should be possible to contact them and get information, though I'm not doing it.

The amount of segments mean that it is multiplexed and multiplexing an LCD is too complex for a PICAXE because of the complicated waveforms required (see the HD44780 datasheet for an example). It does have a backlight which is yellow green and has fragile pins - I broke one off - because vias are helpfully placed where the pins join the body.

It seems this LCD is starting to reappear in the lucky bags! Unfortunately for PICAXE users, small dedicated LCD driver ICs are rather rare these days because you can get really cheap microcontrollers and FPGA-like things that have built-in LCD drivers, so small LCD drivers are pretty pointless.

This LCD uses a 1/4 duty cycle and has four commons plus 12 segment lines. Pins 15 and 16 are unused, the used pins are shown in the table below in the 'SEG' and 'COM' cells (e.g. the cell with 'COM 18' is a common and pin 18). The 7-segment segments are given in the following form: [1A] where 1 is the number of the digit (1 on the left, 3 on the right) and A is the segment (A is the top, continue clockwise, G is the middle segment). Pin numbers start in the bottom left like with an DIL IC.

Usefully the segments for the 7-segment digits have been connected to minimise the required number of I/O pins required if you only want to use those and not the symbols, only 10 pins are required in that case. If you want to use multiple displays in a project, the common lines can be shared, so two LCDs only require 16 pins. Click the thumbnail below to see an example of this technique used with a PICAXE-40X14 transported back in time from the future. 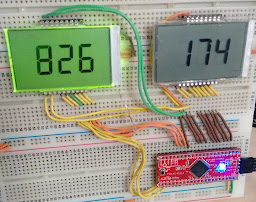 This OLED (or ones very similar) can be found in Indesit Company cookers.

The current for the heater should be set (according to some Google searches) such that the heater does not visibly glow, but it would do if the current was any higher. I've found that 40-50mA seems about right. The heater voltage is low but a resistor can be used for limiting.

Surprisingly, a high voltage is not required to produce a display. In static drive (it requires multiplexing for independent digit control) I've been able to get segments to light (albeit weakly) on a 9V battery. It doesn't work at all below 5V. Better results are obtained above 12V, with the display getting very bright at 40-50V.

Unlike LED displays, the current consumption is rather constant regardless of how many segments are on. The heater only consumes about 40-50mA and the current used for the segments and grids is just a few mA.

The heater is the cathode and the segments are the anodes. To light a segment, the heater must be on, the segment must be connected to the power supply voltage (up to 50V, see above) as must the grid for that segment. Multiple segments are connected to each pin on the VFD so the grids must be used to multiplex the display, much like the common pins on 7-segment displays.

Pinout of the VFD:

Pin numbers start from the top left in the image above. Grids are numbered 1-5 starting on the left.


The VFD is working in a PICAXE-controlled multiplexed circuit!

In terms of power consumption for the anode voltage with most of the segments lit, it is around 7mA at 20V (the minimum required for a good display) and 20mA at 45V. When comparing this to an LED display keep in mind that the voltages are higher so much more power is being used compared to 20mA at 5V. For best display brightness more volts are better.

For driving the anodes and grids, PNP transistors with bases driven by NPN transistors via 10k resistors are used. Eight pairs are used for the anodes and four for the grids. Because only the dot from the middle grid is used in the above demo and it has an independent pin, the middle grid (grid 3) is connected to grid 2 and the dot is connected to the remaining pin on the 8-bit port used to drive the anodes (through the transistors). The grids must be pulled down to 0V when not activated - use resistors not less than 10k because rather large currents can flow when the associated PNP transistor is turned on and 50V is put across the resistor!

Ideally transistor arrays in DIP packages should be used since the 12 pairs of transistors required take up almost an entire breadboard, or an integrated VFD driver could be used.

This display has 7 segments where two have both green and red LEDs, four have only green LEDs and the middle segment has no LED at all. This was unbelievable, but disassembly revealed that it is absolutely true. The display is common anode and every LED has its own cathode pin so no multiplexing is required.