MANY years back, the Parallax BASIC Stamp forum also had an aged thread questing for wireless programming. I can't find it now since they changed forum formats and it's unsearchable. Long story short, the holy grail was finding a wireless USB link that worked. One guy finally found one, IIRC it was IOgear brand that worked, but it was an obscure/obsolete model even then. Not very convenient since the hardware was large and power-hungry... it was not designed to be mobile or battery operated. But apparently it worked. The Stamp uses a fourth line for DTR. Would likely work on a Picaxe too. Will advise if I ever find the thread. That was a simple case of testing lots and lots of existing USB links to find one that worked.

Edit: Found it, sadly the hub only worked up through Windows XP & Vista. https://www.iogear.com/datasheet/generate/GUWH104/view

hippy said:
...The PICAXE was developed long before USB was prevalent, needed to be RS232, had to be relatively low speed, 4800 baud, to work, and had to be reliable. The byte-by-byte transfer is robust and and works well for serial cable transfers, RS232 or USB.
Click to expand...

@hippy
That is precisely what I concluded. And I hope my comments regarding the byte-by-byte protocol are not taken as a criticism. I understand the reasons it was done that way and the need to maintain backward compatibility. To change this would be a humongous task and not worth the time and effort. It works well and is reliable ( albeit kind of slow).

@everyone
I think that given the constraints of Picaxe Programming Protocol, about the best that can be expected for wireless programming is is about half the speed of normal programming. This should be tolerable for most use cases.

I just tweaked the settings for the DRF1212 and was able to reduce the time between bytes to an average of 42 ms. This means that the wireless
link adds about 23.5 ms to the normal 18.5 ms for wired programming: My results are below:

I'll get to building a pair soon.
G

I just tested a pair of HM-19 Bluetooth modules and the results are rather dismal sending data byte by byte as required by the Picaxe Programming Protocol .

It takes ~37ms from the time a single byte is transmitted from one Module until it is received by the other Module. This results in a total time of ~74ms + 16ms Picaxe overhead or ~90 ms per byte.

There is nothing wrong with the Bluetooth modules. The 37ms represents packet handing overhead as it is the same for a 1 byte packet or a multiple byte packet. The byte-by-byte protocol used by Picaxe Programing is the limiting factor. This cannot be changed.

I am abandoning Bluetooth as a viable option at this time.

IMO the best hope for reasonably fast Wireless Programing will be with an NRF24L01+ or other front end module where the packet size can fixed to 1 byte ( if possible).

So far the DRF1212 has the best performance when sending 1 byte packets .... I will clean up the code and the schematics and re-post these as time allows.
J

Yes a disappointing result for the HM-19's and much the same result as with my HM-10 fakes. Keen to try some NRF24L01+ modules!

I think I am going end this with the DRF1212 Modules. These work fine to demo wireless programing ( Point to Point) but would probably not do well in a classroom with more than a few students. These DRF1212D10 modules should have decent range and should be available on Ebay.

I may try the NRF24L01, or Si4463/38 (front end) in the future, but not the near future as either of these will require quite a bit of development time. I would have to write what amounts to an API for either of these. I don't have the time right now.

Simply put, the "Picaxe Programming Protocol" does not lend itself very well to wireless programming in regards to reasonable speed.

The code and schematics that I will post will be using DRF1212D10 modules as offered by DorJi. The code should be good enough for anyone to see how it was done and to pave the way for someone skilled with RF-Transveivers to adapt.

Look for a new "Wireless Programming" thread in Completed Projects within the next few days.

Thank you for all your hard work on this project Goey...

It is a valuable asset to the forum!

johndo said:
Thank you for all your hard work on this project Goey...

It is a valuable asset to the forum!
Click to expand...

It's funny though, elsewhere new chips are coming out so quickly I can't keep up. They are cheap and have too many features to list, including wireless IoT capability. Apparently there is nothing this new $6 one doesn't have and can't do. Includes a hex key! The reference docs for M5Stack products. Quick start, get the detailed information or instructions such as IDE,UIFLOW,Arduino. The tutorials for M5Burner, Firmware, Burning, programming. ESP32,M5StickC,StickV, StickT,M5ATOM. 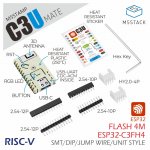 To much new stuff to keep up with nowadays. I no longer desire to have the latest & greatest new thing in micro-controllers.

IoT does not interest me very much. We are too "connected" as it is IMO. One flip of the switch (Internet) and civilization as we know it will cease.

Interesting times we live in ..

Goeytex said:
To much new stuff to keep up with nowadays. I no longer desire to have the latest & greatest new thing in micro-controllers.
Click to expand...

Agreed. This is the only hex key I need with Picaxe.

Goeytex said:
IoT does not interest me very much. We are too "connected" as it is IMO. One flip of the switch (Internet) and civilization as we know it will cease.

IoT to the cloud doesn't interest me, but IoT at home does. Flip of the switch on the electric grid, and we'd also be up the creek. With solar panels (in an appropriate place, which Nova Scotia isn't) you can do a lot with a little. Lighting is almost a nominal usage (with care and planning). I have a little 500 watt hot plate which will cook an egg in about 3 minutes at 200 watts. Microwaves make up in speed of cooking time what they cost in instantaneous current consumption. Heating is, of course, the big problem.