Trawling Github, by chance I found a very simple video display circuit that I thought may be useful for a picaxe, the bad news it uses an Atmel Attiny85 (heresy! ). The ATtiny can generate display 32 x 16 characters of text on VGA output with 6x10 pixel font, data is sent serial at 9600bps. The display is controlled by a limited few ANSI escape codes, I have not been able to determine how it all works yet, however a monochrome display printing plain text is not difficult.
I have not yet managed to do graphics and at 64X64 resolution I'm not sure if it's worth the trouble. Cascading three ATtinys enables an eight colour display but again I'm not sure if it justifies the effort. I thought the low component count for a monochrome display (one attiny one 20 mHz oscillator a few passives and a VGA socket) possibly justified purchasing a cheap AVR programmer, those with a pickit2 or a real com port on their PC will have no bother burning the chip. The link is below. 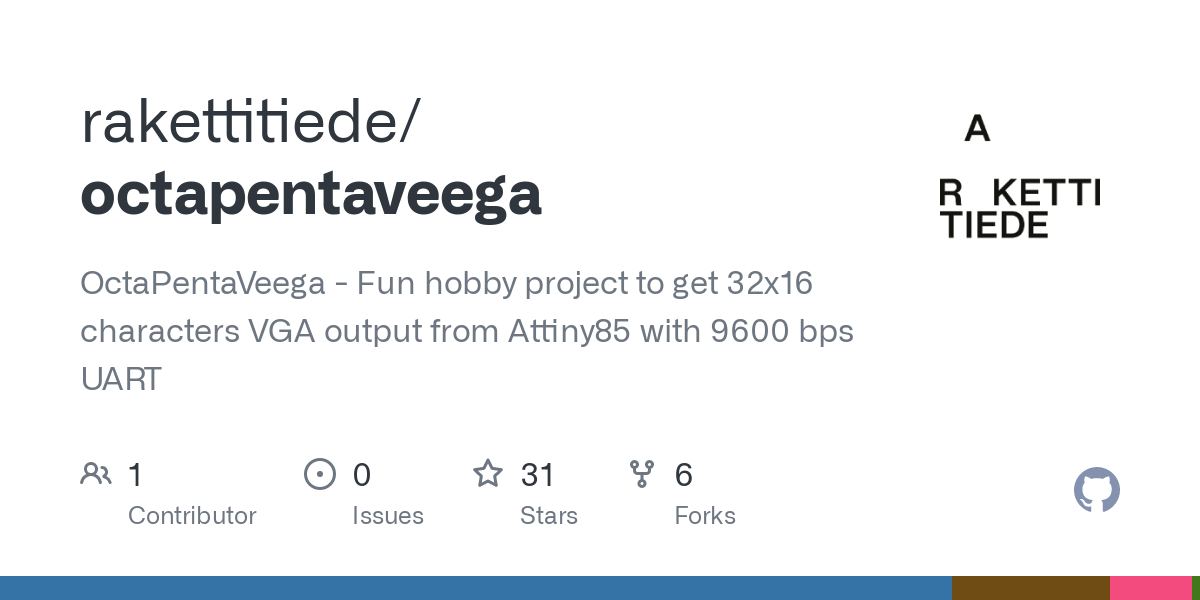 Staff member
Options for video displays for PICAXE and microcontrollers are quite limited. The PICAXE cannot generate video itself and most microcontrollers struggle, provide only limited resolution at best.

My choice would be a Single Board Computer (SBC) which supports video generation. Something like a Raspberry Pi or similar would fit the bill, should be able to take serial data and turn that into a display image. The Pi offers full HDMI and Composite, and can do VGA with added hardware. The only challenges are writing the software and having to drop the PICAXE 5V output down to 3V3, though that can be a simple two-resistor divider.
B

I'm afraid I have not made myself very clear, what I meant was there is a very simple circuit on GitHub for a basic 32x15 text display with standard 9600 baud serial input using just 1 attiny85 and an external 20mHz clock. I'm guessing they chose VGA as it is possibly easier than composit or RGB/scart.I thought it would make a good substitute for a 20x4 LCD, it could be used for displaying tabular data from say a data logger or something like a home weather station. A lot of modern televisions have a VGA input just begging to be utilised.
I used a similar circuit and an 08m2 a few years back and fooled the wife into thinking the telly was bust by putting up a bogus blue screen of death and an error message. I know it's not a picaxe project as such, but nor are a lot of other add-ons that make picaxe useful. When I had a play withe the circuit the hardest part was soldering the VGA socket getting, the syntax right for the VT100 codes and trying to decipher the demo programs that were in python. The main attraction was the simplicity of it, I wanted full colour and gobs of resolution theres the raspberry pi ,maximite esp32 , fpga all expensive and with a very steep learning curve!

Staff member
I get where you are coming from and entirely agree; a great substitute for an actual LCD if one wants a display one can read from a distance or need more lines and characters than most LCD have.

VGA is usually chosen because it is easy to implement and can provide colour. RGB/SCART should be the same, though the voltages may differ. Monochrome composite is not much harder but colour is challenging. Plus the displayed results are rarely as good as on a monitor.

If an existing solution is good enough then no reason not to use that, and something which exists is always better than something which doesn't. But, if one does want more, the SBC route is a better option because they should have more memory which allows more line, more characters. An SBC like a Pi shouldn't be too hard to code for, nor that expensive if one buys one of the older models second hand. It should be possible to deliver a solution with a quite shallow learning curve. It's something I had been thinking about for a while and might have to move it up my To Do list.

Finally a good use for an Arduino... being a VGA generator for Picaxe output!

I researched quite a few video displays a while back, I had an idea for a retro style computer and needed a video display the best by fare was the VT100 ASCII display on the Maximite site but the pic32 had more processing power than the chips for the computer, it just did`nt seem right!
The AVR fans seem quite keen on video circuits there is the Arduino TV out which was awful largely because I can`t fathom C. The best I found for Arduino was the vgax Colour VGA it is very low resolution but 40 years ago it would have been earth shattering. https://github.com/smaffer/vgax.
The main attraction of the attiny85 circuit is the attiny is about £1.50, an 8 pin chip and it had the source code AND a HEX file, therefor no faffing with big IDE`s and a laundry list of make files and libraries.
Ever since I built my first regenerative received I have been obsessed with getting the most from least and since my first NE555 it`s been the same with chips. I cobbled the display together on a bread board and used an 08m2 to test it but the 8 pin symmetry was ruined by the 14 pin 74hc04 I used for the clock!
You must log in or register to reply here.
Share:
Facebook Twitter Reddit Pinterest Tumblr WhatsApp Email Link
Top