This nifty Arduino project appears to use one ultrasonic sensor and one servo to keep a ball centered on those rails. Elegantly simple form factor! Should be doable with a Picaxe 08M2, IMHO. Looks like a great demonstrator project for PID loops. Maybe a good opportunity to finally use a VL53L0X laser sensor. Keith Baldwin shared his simple code at https://picaxeforum.co.uk/threads/erco-laser-range-finder.30127/post-329540

I will get to it trying this project at some point. Sure hope nobody beats me to it! 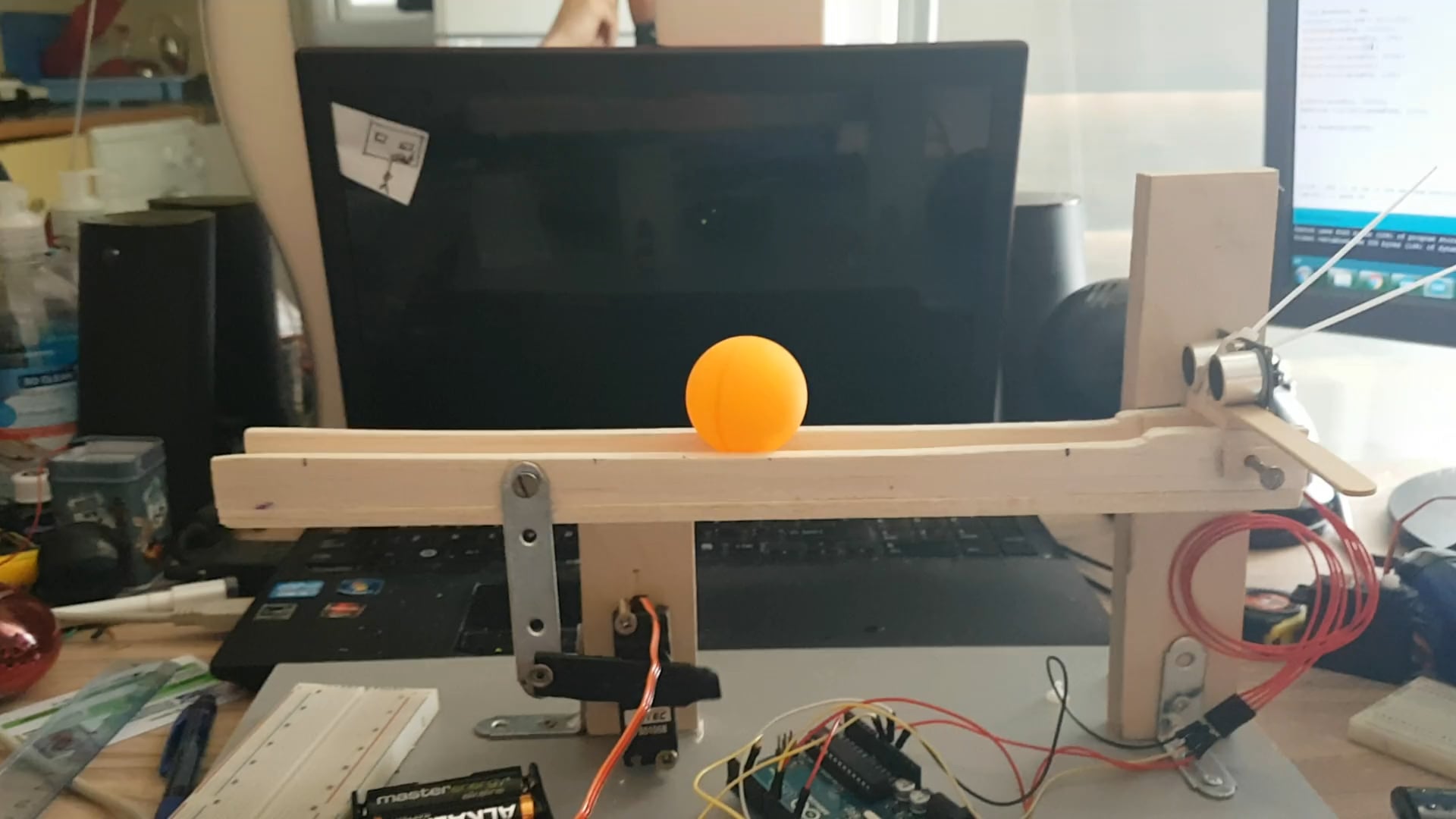 r/arduino - A project I’ve made by myself. Automatic Control System using arduino. The purpose is to balance the ball in the middle of the beam.

That's just a screenshot below, don't waste your time clicking on it!!! Visit the Reddit site above to watch the video.

erco said:
That's just a screenshot below, don't waste your time clicking on it!!!
Click to expand...

Haha. I thought it was my bad internet connection until I read that .

Here's another neat project I would like to do using Picaxe, an analog meter clock:

I have a head start:

My three panel meters to make my clock arrived from AliExpress. One seems nervous.

Exactly! Connection wasn't soldered (blue arrow) and was making & breaking connection. Fixed it, but calibration is off. AliExpress seller is sending a replacement. Good service!

Look like the lower spring has one less turn than the upper spring or is wound less tightly - that would affect calibration.
Does my knowledge of moving coil meters make me ancient?

VINTAGE, CLASSIC or LEGACY... anything but ancient.

My "seconds" label shown below:

I used to make labels illuminated from the back using one of the document films - maybe D-14? It made great solid black and completely clear negatives - ideal for illuminating with even an ancient low light LED.

Yes, my laser printer isn't up to the job. But it's a start.

The Brother HL2270DW laser printer is on its third (fourth?) drum. I may yet have to replace it :-( Maybe next year?
It's a wireless, double-sided capable printer so it gets most of the printing from me and my better half. I did run off the initial proof of my first book (800 pages) on that printer. Can't imagine why it's showing its age ;-)
The inkjet printer is also a Brother (J430W) for the few occasions - such as a graph from the small solar power system - which need color. The J430W is probably 10 years old but has one redeeming quality - it continues to work - all the features: print, scan, copy, fax and the document feeder ;-)
B

Yeah this project does sound neat. I'm looking forward to seeing how it goes.
I keep meaning to dip my toe in with AliExpress instead of using ebay.
Oh and your ozone project looks interesting, are you allowed to post more details of it?

My "seconds" label shown below:

Hi Erco, that is a very cool app, something I was looking for but I only had an expensive option. Also nice that it exports to SVG, and then (I think) you can edit, add and beautify further (colorize, but even include a secondary scale me thinks) using InkScape ... . Thanks again!
Jurjen
Last edited: Dec 5, 2021

bogbean said:
I keep meaning to dip my toe in with AliExpress instead of using ebay.
Click to expand...

AliExpress does take Paypal now. Previously I seldom used AE because giving my credit card info was the only option. I used small prepaid Visa cards to limit risk, which is a PITA. But no worries with Paypal, I have done dozens of AE transactions now. A few items had issues (just like Ebay) but were resolved easily by AE, I never had to contact Paypal.
P

Some of the sellers on AE are "a bit optimistic" about their wares (occasionally as bad as Banggood :-( but if you buy a known brand product you generally get what they advertised. My most recent EPEver Tracer charge controller came from AE and was exactly as advertised as was the V/A/AH/WH meter that I use on the battery bank. I also use Paypal for that extra bit of security.

papaof2 said:
Some of the sellers on AE are "a bit optimistic" about their wares
Click to expand...

I've tested enough 850mAH - or less - 18650's with a "3000mAH" or higher label to only trust certain brands and suppliers :-( 850mAH is fine for the "In case of power failure" single 18650 light that lives in the kitchen - I charge it a couple times a year and it's rarely on for more than few minutes before better lighting takes its place. That group of cells had small capacities but they hold a charge very well.
batteryhookup,com often has pulls of 2200mAH 18650s and I'd trust those to be at least 90-95% of the label rating. They have some 3.8AH LiFePO4 26650 cells for under $3US each delivered ($34.40 for a box of 16, so $2.15 each + tax + ship) and a pack of 4 of those in series lasted longer than the original 4.3AH 12 volt AGM battery in a UPS under the same load (UPS low voltage shutdown at 10.7 volts but the pack's lower limit is 10.0 volts), so they were at least the label AH rating and possibly higher in useful watt hours with the discharge curve being flat longer than an AGM - the AGM's do tend to droop quickly once they drop below 12.0 volts..

I have multiple UPSes in need of battery refreshment, so I've ordered a box of these. How did you wire them up? Any change in charging?
P

Many UPS units use either a 12 volt battery or two 6 volt batteries in series. Some of the bigger ones use two 12 volt batteries in series for 24 volts. A few use three 6 volt batteries for 18 volts - I have two of those that are in the flat "under monitor" configuration. If you need a 12 volt source, then wire the batteries in 4s (4 in series) and parallel however many are needed to meet or exceed the AH rating of the original battery. You need a battery welder and some nickel strip for putting the battery pack together (maybe $25 from Ebay, Banggood or AliExpress). You need a BMS (battery management system) that matches the the battery pack you build - minimum safe cutoff (typically 2.5 volts/cell for LiFePO4), maximum charge voltage (typically 3.65 volts although some go to 4.1; if the BMS is settable I'll use 3.55 volts) and the BMS current capacity must match the amps the battery will need to deliver - ballpark of 10 amps per 100 watts of UPS output because UPS units are not all known for their efficiency as inverters. The typical UPS charger is set for the original AGM battery and a LiFePO4 pack will be happy with whatever that charger delivers - the BMS will handle any overvoltage from the charger.
A "400 watt" UPS will need a battery pack that can handle at least 40 amps discharge current and a BMS to match. The BMS should be able to handle whatever charging current the UPS provides but that's usually appreciably less than the discharge current. A UPS will typically charge back up fully in 8 hours or less. The UPSes I rebuilt are low power, long run time units with a maximum output of 70 or 90 watts (keeps your wireless router running for hours) and the charge rates were will within the LiFePO4 cells' 1C charge rating. IIRC, those cells can handle a 12 amp continuous discharge with a 30 second peak discharge of 28 amps so be sure the wiring is adequate to handle those currents.

Thanks much. Apologies for going OT.