Items covered in this blog entry:
HD44780 is the de facto standard for character LCDs, and many manufacturers have LCD drivers that use the same command set, which means no code changes whatsoever are required to change to another HD44780-compatible LCD of the same character configuration regardless of manufacturer or size. All major microcontroller systems have libraries and/or add-on boards for controlling HD44780 LCDs. As all these displays are HD44780-compatible, they work with the AXE133 firmware as well as when using the parallel interface directly.

I've put the pinout here but reversed it because the pinout in the datasheet is for the view from the back but you'll usually be wiring it when looking at the front. 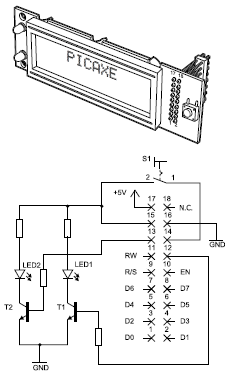 These displays are used in Enel smart meters in Italy. Their website says that the smart meter project began in 2001 which explains the product code (AMPY2001-11) and there is a "bidirectional" version of the power meter for customers who have their own "production plant", which may explain the three phase indicators. For a normal meter, only the L1 symbol will be lit.

This blog entry isn't advertising blurb - there is no documentation included for the HD44780-compatible display apart from a pinout and I couldn't find a datasheet on the internet which was a pain when I discovered that it's a 16x1 LCD with a second row of symbols! The characters themselves are also only 5x7 instead of the more usual 5x8 so take that into account if you want to use CGRAM characters on the first row or the visible cursor.

The symbols are addressed like the characters on a second row of a 16x2 LCD would be, so the addresses start at 192 (line 1 character 0 for those using that system whose name starts with an 'A'). The pixels on the first row of the 5x8 character control the individual parts. See the table below - these pixels are numbered from 1 (top left pixel) to 5 (top right pixel). The character locations for these symbols is about the same as for the 5x8 characters on a 16x2 LCD, but the 'h's are controlled by the character location following the kW/kVar that they are associated with. Also, the &#8711; and ! are controlled by the same pixel.

The only downsides are no backlight, no pin for a manual contrast control without modifying it (see below) and the symbols mean that you cannot change the viewing direction (which is 12:00). There is a built-in resistor for the correct contrast level at 4.5-5V but if you want to use the display at 3V and use a negative voltage generator charge pump for the contrast control, you'll need to mod it. Once modded, the LCD module can be powered by 3V if an external negative voltage generator is used. If you won't use the symbols, you can initialize the LCD for one line (instead of two) which will be beneficial if using 3xAA batteries.

To add an external contrast control, R13 needs to be removed and a wire run from the VLCD pad to the unused pin 18 on the connector as shown in the picture below. Click the picture to view full size.

As you can see in the picture, this display is directly compatible with Rev-Ed's AXE133 and can be plugged straight in.

The contrast of this display is horrendous and only gets as good (least bad) as in the photo if viewed from below (6:00 viewing direction) and the contrast adjusted carefully. The PCB appears to have a date code of 9530 (week 30 of 1995), 12 years after the Supertwist LCD was invented, and the contrast is fine if one-line mode (1/8 duty cycle, only first 8 characters work) is selected. This suggested that the blame led with R4 being a zero-ohm resistor (1/16 duty cycle requires a five-resistor divider), though changing the zero-ohm resistor to 6.8k made little difference and contrast remained poor, so the real reason is probably the tight-fisted use of a TN panel rather than STN. 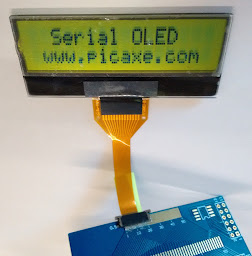 This display has good contrast and a 12:00 viewing direction (look down at it). Connection is via an FPC with 0.5mm pitch, though a 1.0mm pitch may be obtainable by cutting the FPC below the thicker tracks near the display and scratching off the insulator.

Pinout: (Pin 1 is on the left when viewing the LCD)

This display has no markings and has 15 pins on an unusual pitch. You can solder LED offcuts onto them to connect this display to breadboard. Application of this display would have been a glucose meter. This display operates with a 1/2 duty cycle as it has two commons, and it has 13 segments. The viewing direction (or bias angle) of the display is 6:00, meaning it's best viewed from below. 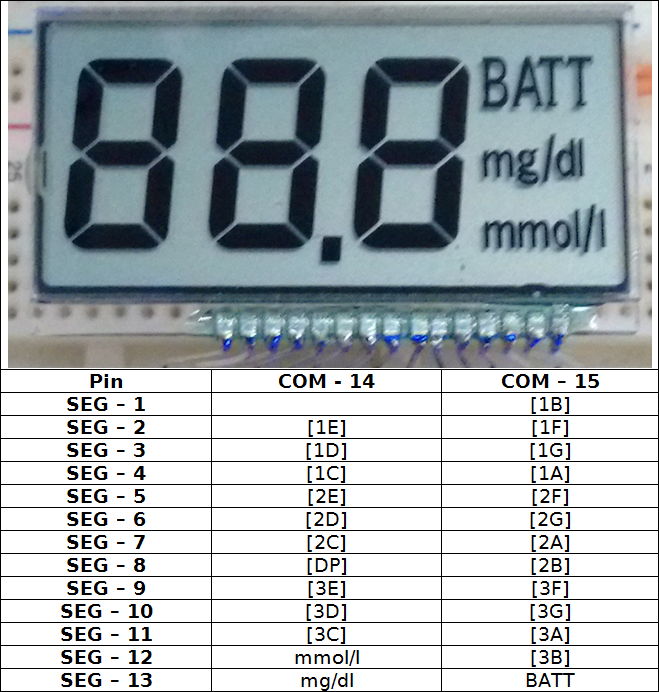 I would expect this display to be difficult to drive directly with PICAXE, though it might be possible.
N

This display is a standard 16x2 HD44780-compatible LCD with green backlight and it runs from a 5V supply. No external resistor is required for the backlight, as the correct resistor is already fitted to the PCB of the LCD module.

The pinout is the usual for LCDs of this form factor and this LCD can be used directly with an AXE132 PCB with the pinout 'staggered' (like when using the 20x4 OLED). The display works like any other HD44780-compatible 16x2 LCD. 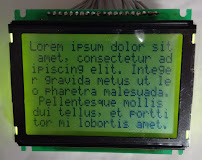 This display is a 128x64 KS0108B-compatible graphic LCD with a green backlight, diagonal screen size of 64mm, 4:3 aspect ratio with non-square pixels, and it should work with any KS0108B library for any microcontroller. There does not appear to be an on-board resistor for the backlight, so the required resistor for the best brightness without burning it out will have to be found by guesswork. There is an on-board negative voltage generator for the contrast voltage. The twenty pins are on a 2mm pitch, so it can't be used directly on breadboard, but you can of couse solder a 20-way ribbon cable on and terminate it with a connector with a 0.1" pitch.

The pinout in use is common for KS0108B-compaible LCDs and is: 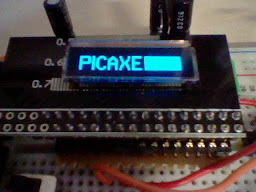 The OLED uses an SSD0303 and gives you many interface options including parallel, SPI and i2c. The pinout of the OLED can be found on page 44 of that datasheet as well as the leaflet included with the pack of assorted displays. The OLED is also easily dimmable through software commands, unlike some OLEDs which require modification.

The OLED is blue - the shade of blue it uses looks nice in real life and is a deeper shade than in the photo above - the screen burn-in example below is closer to the real colour. The right way up is with the tab at the top which allows you to fold the tab behind the OLED and have the breakout board with the pins at the bottom.

Use of an adapter board like the one shown in the photo (search for 'tft to dip' on eBay) is essential if you want to use the display on breadboard or stripboard - you can't just solder jumper wires to the connections and bend them to fit in a breadboard since the connections are fragile and you will break them if you do this.

PICAXE OLED text demo
PICAXE OLED clock demo​
Note: These OLED Displays are very vulnerable to screen burn (particularly on the brighter settings), unlike the Winstar OLEDs sold by Rev-Ed. Running the clock demo for more than a few minutes on the bright setting or a few weeks on the dimmest setting will cause visible screen burn-in.